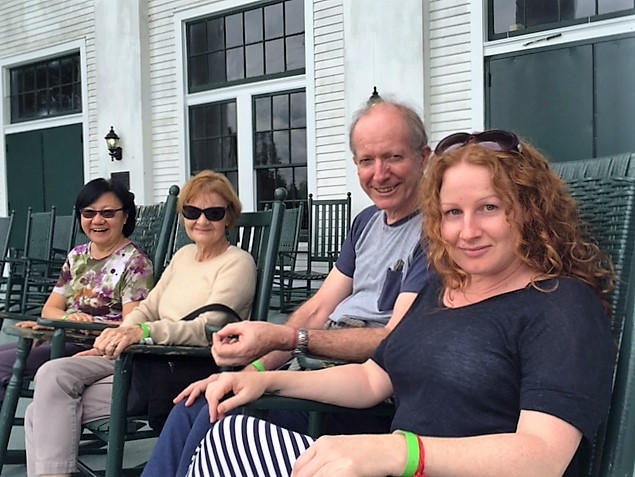 Four people associated with Hayagriva (members and former members) attended the Light of the Path Retreat with Kyabje Zopa Rinpoche in North Carolina. Owen and Lesley joined Kirsty, who is travelling for a while, and Oi Loon, who now spends most of her time in Malaysia. They joined 300 FPMT students from around the world including more than 40 sangha.

This is the fourth LoP Retreat and, while Rinpoche hasn’t actually started the text, he gave many powerful teachings on the path and how vital it is to practice. The teachings were live streamed on YouTube and through the FPMT website with simultaneous translations in Italian, Spanish and French with an audio in Mandarin also available. Transcripts are coming soon (refer to the last link below).

During the retreat Owen’s mother and the mother of Merry Colony, a student who has served the FPMT for many years, passed away within a few hours of each other and that night Rinpoche kindly did an amazingly powerful Medicine Buddha puja for their benefit and for the others who ask for Rinpoche’s help.

Late one evening Rinpoche was leading a walking meditation in the grounds of the stunningly beautiful YMCA facility in the mountains where the retreat is held and as we were leaving the gompa the retreat organiser announced that a black bear had been seen on the property so keep a watch out. It helped focus the concentration.
It’s a great retreat for inspiration and to change your view of reality for a while. There will be more LoP Retreats in the future.

View more photos taken during the retreat.
Note: You don’t need a Facebook account to view these photos. Just scroll to the bottom of the Facebook page and click on “Not Now”. Then click on the first image to view the slide show.

Below is an extract from the FPMT’s eNews that provides handy links to various video, audio and to future transcripts. It is reproduced for your convenience:

Links to video and audio of the current Light of the Path 2016 teachings with Lama Zopa Rinpoche: